You step into a tasteful home filled with colors and shapes. Their appreciation for the work of Surinamese artists  shows clearly on every wall of every room in the house. The couple Michel and Cynthia Frangie has, through the years, acquired a significant art collection, which time wise spans almost half a century. Some time ago they generously made a number of their paintings available for use in the two greatest overview exhibitions of art from Suriname, Twintig Jaar Beeldende Kunst in Suriname, 1975-1995 [Twenty years visual art in Suriname], which were held in the Surinaams Museum in Fort Zeelandia in Paramaribo (November 24, 1995-February 1996) and subsequently in the Stedelijk Museum in Amsterdam (December 16, 1996- February 16, 1997). They gladly share their love for art with others. 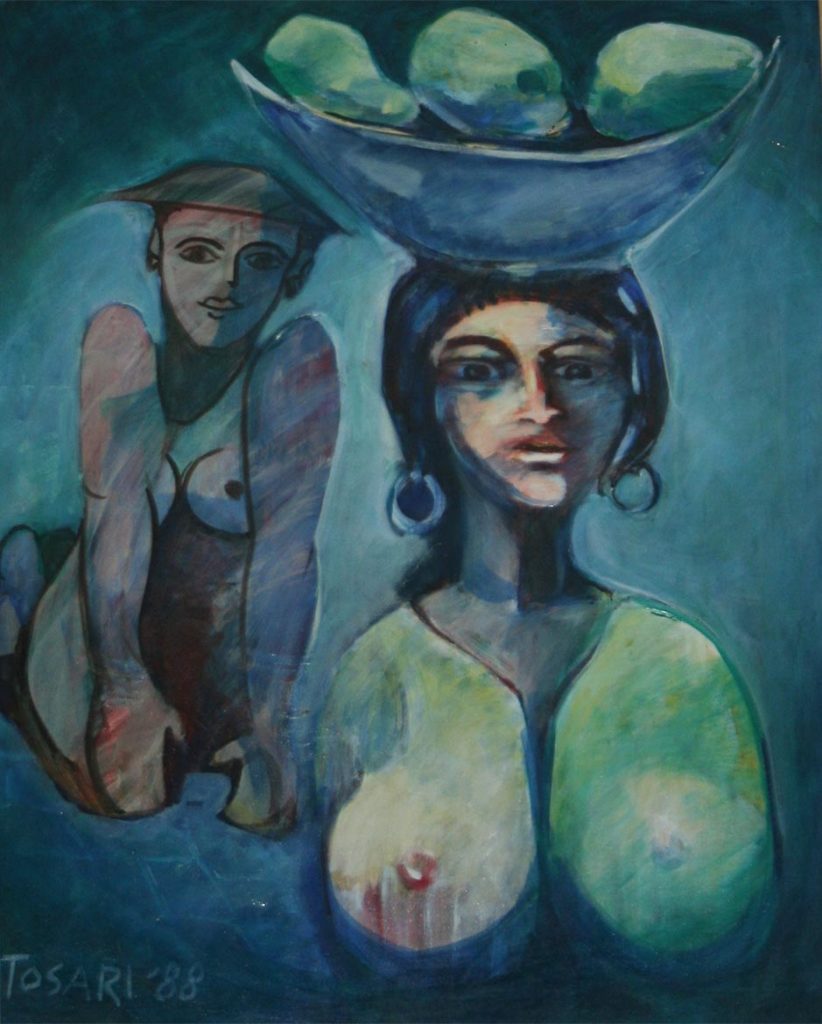 Amongst the many paintings of at least fifteen prominent artists  – such as Remy Jungerman, Reinier Asmoredjo, Ron Flu, William Lie, Jules Chin A Foeng, Oetoen, Soekinta, Winston van der Bok, Erwin de Vries and Glenn Fung Loy it is noticeable that one artist in this group is represented very well indeed.  Etchings, prints and paintings from several of his style-periods are carefully framed; they are hung in important places throughout the home, or in some cases, hidden in intimate spaces which encourage relaxation and introspection. Why such an obvious preference for René Tosari? 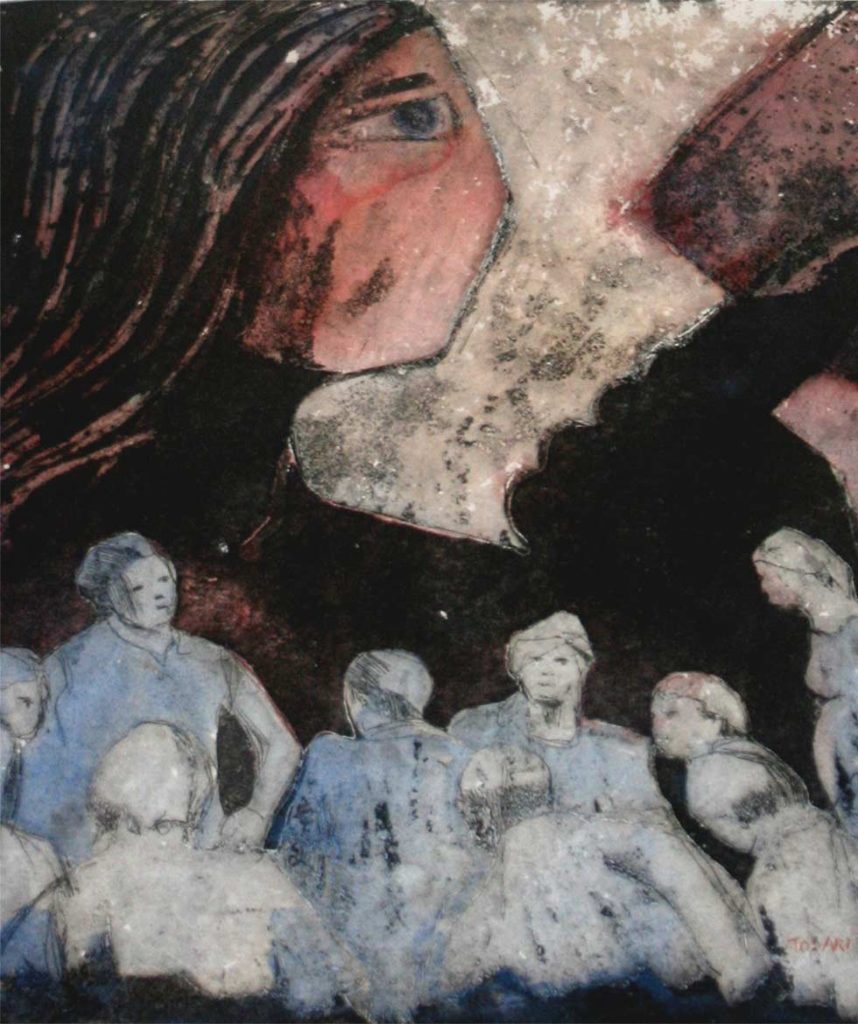 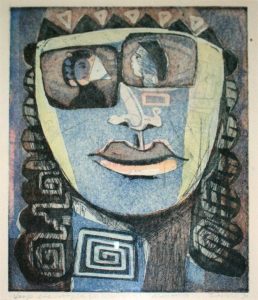 Between the Frangies and this artist, there exists a friendship of more than 30 years. At one time they met for purely practical reasons: the businessman from the manufacturing business was in need of advice about printing and painting on textiles which he imported, and the artist was brought forward as the most suitable expert. Tosari invited Michel Frangie to visit his studio and ever since that initial encounter they have remained friends. At one of his first exhibitions, in Theater Thalia (May 24-31, 1989), the couple bought several of the works on display. To some extent this was intended as encouragement and support, but also because they were truly moved by his creations. One of their favorite paintings by Tosari is ‘Hongersnood’ [Famine] (it shows a mother with a baby). But the blue portrait of a woman and a landscape in which a ‘kappa’, an iron sugar pan, are portrayed, are also amongst the favorites. 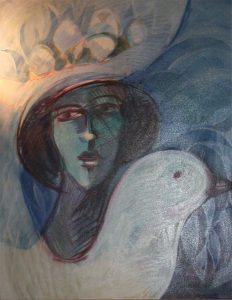 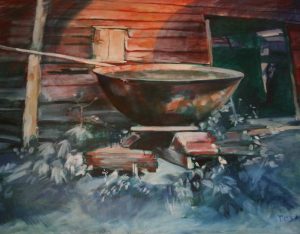 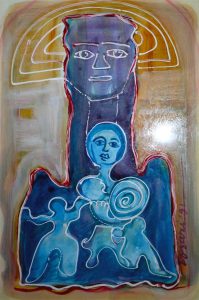 Of the two, Cynthia Frangie is truly the large art lover. “I love art, I love beautiful things. Very modern paintings don’t appeal to me. Although I can occasionally appreciate abstract works because of the colors, I want to be able to tell what it is that a painting portrays.” 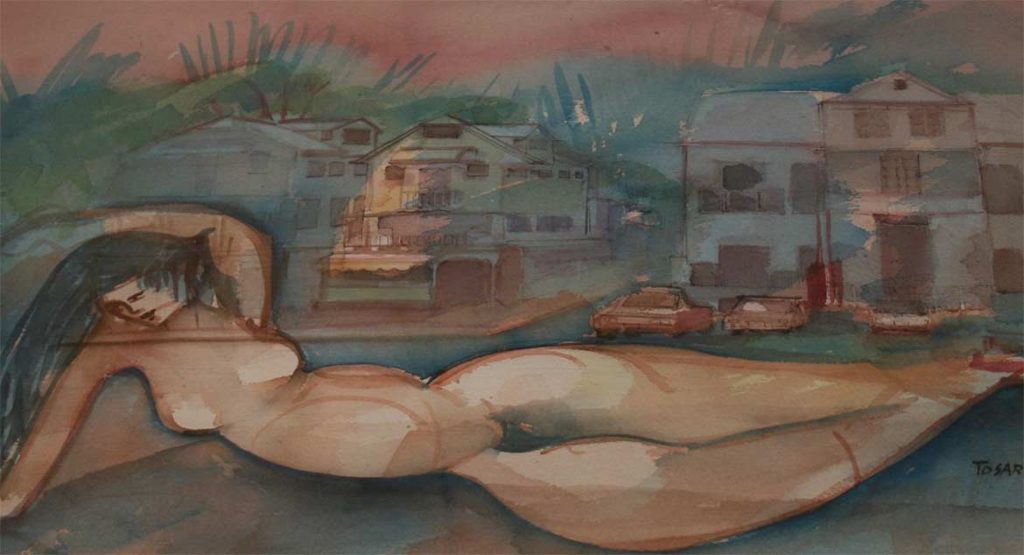 Michel Frangie especially admires his friends character: “If Tosari wants to do something, he does his utmost to achieve it.”, he says. Cynthia has more of an eye for his artistic nature and calls him a truly good painter. She started buying his work since early in his career and says proudly: “I think that we have the most beautiful collection of etchings by Tosari.” 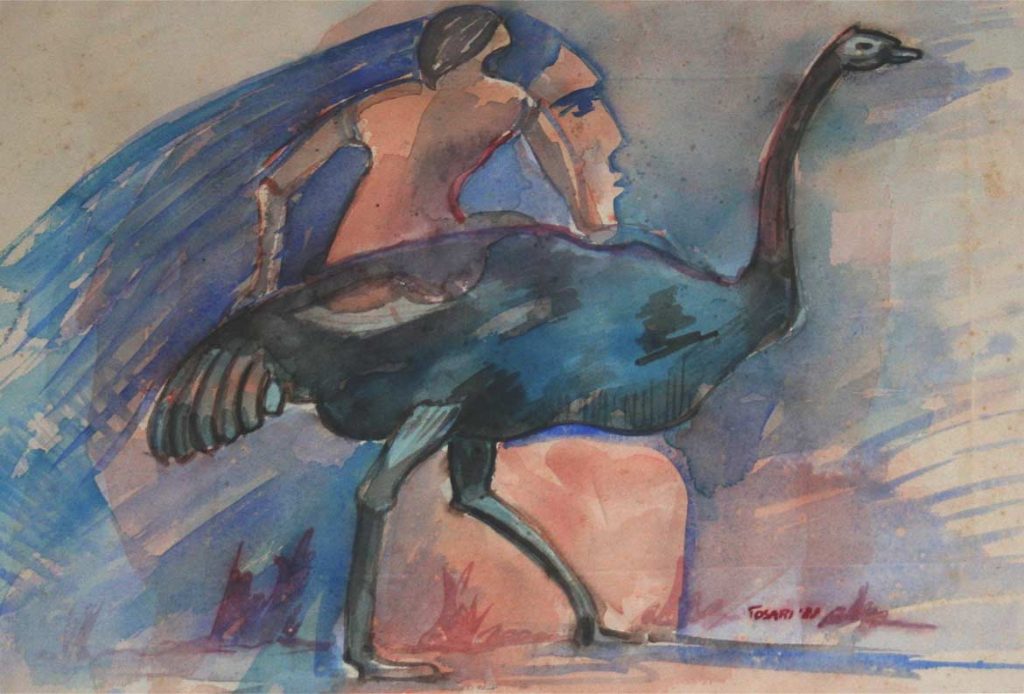 Chandra van Binnendijk (Paramaribo, 1953) is editor and publicist. From 1977 until 1988 she was part of the news editors of various newspapers and radio stations, and was a correspondent for various Caribbean media. After ten years she said goodbye to active journalism and is since focusing mostly on culture, art and history. She has co-written several art publications amongst which Twintig jaar beeldende kunst in Suriname 1975 – 1995 (Amsterdam, KIT Publishers, 1995) and she was author and compiler of the art catalogue Zichtbaar (Paramaribo, 2005) about the art collection of De Surinaamsche Bank. Recent publications in which she was involved as co-author and co-compiler are Bouwstenen voor een betere wereld. 250 jaar vrijmetselarij in Suriname (Paramaribo, 2011) and TOR. A People’s Business (Paramaribo, 2012).